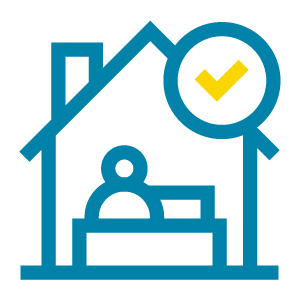 . 4, 2021 — Although the Governor’s Office of Employee Relations (GOER) sent state agency heads a directive to work with PEF to develop telecommuting plans and submit those plans to GOER last month, the agencies have been less than enthusiastic about involving the union in the planning process.

PEF leaders have been insistent and some say they believe members will be pleased with the results, but other leaders aren’t so sure.

Conrad Davis, PEF’s labor-management chair at the state Department of Taxation and Finance, said the union had to demand its right to participate in the planning process. “We insisted, and insisted, and insisted. Finally, we were able to go over their draft plan with them at a joint meeting, and we submitted our comments and changes. I’m sure our members will be satisfied.”

Ron O’Bryan, PEF Division 357 council leader at the Office of Information Technology Services (ITS), said he was pleased that the agency responded to PEF’s comments and changes, saying that it has tried to incorporate them in its plan. He is currently reviewing that plan.

Jeffrey Smith, a former PEF L-M chair at ITS, said he thinks more than 1,800 of the agency’s 3,500 employees are working from home as accommodations for medical issues, such as having been exposed to someone with COVID-19. They must submit notes from their doctor saying it is necessary for them to work from home.

Ade Oluwo, PEF L-M chair at the Department of Financial Services, said he feels management did not act in good faith, because it did not agree to meet with PEF early when developing its telecommuting plan and it barely included any of the changes that PEF requested to the plan that it gave to the union late last month.

“We gave them 29 changes, and they only included one and part of a second one,” Oluwo said.  Now, PEF is asking for a meeting to discuss why the union’s other proposed changes were not incorporated, but management says it wants to wait nine months to discuss the plan that it has sent out to everyone at the agency.

Oluwo said telecommuting has worked extremely well throughout the pandemic and the lockdown and productivity has been very high.  He questioned why management’s new plan says managers can visit telecommuting DFS employees in their homes to check up on them – a process PEF successfully fought to keep out of the Statewide Emergency Telecommuting Agreement that expired July 2.  “Why do they need to do that?” he questioned.

Ken Ferro, a PEF leader at the state Health Department said that after a couple of joint labor-management meetings, management sent the union its draft plan on July 22 and PEF submitted its comments and changes on July 26. But Ferro said it came across as “take it or leave it,” and he will be surprised if the state incorporates PEF’s changes in the DOH plan.

Ferro said he thinks many members at DOH who want to telecommute will be frustrated by the department’s plan because it requires employees who telecommute to submit very detailed daily work plans, and it will bog down supervisors who will have to constantly check in with telecommuters to verify that they are working on the things they said they would.

“We just do what the state tells us to do,” said Ferro, who is an accountant. “It will take our members as long to fill out their (telecommuting) work plan, as it does to do the work.”

Ferro said he feels the state wants its employees to fail because that opens the door to contracting out more work and to increased privatization of public services.

PEF Director of Statewide Field Services Katie Vorwald said she is keeping track of the plans that are submitted to GOER, but with the 2019-2023 PS&T contract now ratified by membership, a new clock begins. Per the collective bargaining agreement, all state agencies must now develop and implement a telecommuting policy within nine months of ratification, which means late April 2022.