PEF shares Fund Our Future info with other SEIU locals

/ Volume 40. No. 3 / PEF shares Fund Our Future info with other SEIU locals 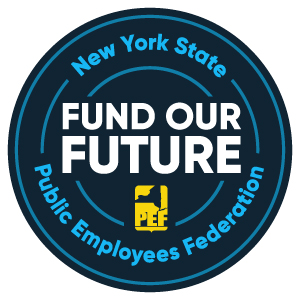 The leaders of other SEIU local public employee unions throughout the country learned about PEF’s Fund Our Future campaign in a virtual meeting April 14, where PEF President Wayne Spence and Vice President Randi DiAntonio shared information about it. The leaders especially liked the video showing PEF members talking about the work they do for the people of New York.

SEIU is the Service Employees International Union and it, along with the American Federation of Teachers (AFT), are PEF’s parent unions and international union affiliates.

Spence said PEF is using the Fund Our Future campaign to educate New Yorkers about the key roles its members play in bringing them the services they need. The campaign also is educating PEF members about the need for them to share their stories with other people.

“We wanted to engage our members to engage the community,” DiAntonio said.

When the pandemic struck in 2020, PEF members often were forced to go to new and extreme lengths to make sure those services were maintained. Whether they were working in hospital intensive care units or taking unemployment claims at the state Labor Department, they frequently made difficult personal sacrifices to meet the public’s suddenly increased needs.

“COViD magnified the importance of what our members do,” DiAntonio said.

Spence said he wanted the public and policymakers to get the message: “Don’t call us heroes today and then give us zeros tomorrow!”

Spence said he began meeting weekly with Alan Lubin, a retired leader of the New York State United Teachers, to brainstorm on “how to highlight the work PEF members do and how underfunded state services are.” The Fund Our Future campaign resulted from those meetings and it fit well with AFT and SEIU goals.

Then PEF created the videos of its members talking about their work.

“I can never be as eloquent as our members can be in telling about the work they do,” Spence said. “They are the true Fund Our Future ambassadors.”

Spence said it has been gratifying to see the positive effects the campaign has had so far.

“We shared our priorities with Gov. Hochul after she appeared at our convention, and we were surprised to see that she incorporated a lot of them in her state budget, even using our buzz words and language.”

“We sent our video to the state commissioners to put out about the need for services,” Spence said, and mentioned a commissioner told him that he was always comfortable with PEF calling for his agency to get more funding.

DiAntonio invited the other SEIU leaders at the meeting to join the Fund Our Future Coalition on its web page and follow it on Facebook.

The leaders had lots of questions, including what PEF has found to be the most effective way to get its members involved in the campaign.

DiAntonio said the most important thing is to educate members about it, meet people where they are, and then keep their participation easy and simple.

The leaders had many positive responses to the presentation, such as Local 526M Executive Director Andy Potter’s comment that he likes the way the campaign “really lifts people up.”