/ Volume 40. No. 7 / Congratulations to this year’s Joseph Scacalossi Scholarship recipients

“Each May, Congress sets federal student loan interest rates for the academic year based on an auction of 10-Year Treasury notes. As the Federal Reserve has raised interest rates to control inflation, consumer debt has become more expensive,” the Forbes article said.

PEF is dedicated to helping members and their families achieve their higher education goals.

Since 1988, PEF’s Joseph Scacalossi Scholarship has helped children, stepchildren or wards of active, retired or deceased PEF members pay for higher education. As a tribute to a state Department of Labor member who helped form PEF and fought for the rights of his members in Manhattan, every year PEF awards 10 students $1,000 annually for four years.

Below are bios of some of the students: 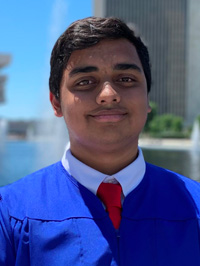 Zaid Ashar, the son of Tabassum Insaf, graduated from Shaker High School in June 2022 as a National Merit Scholarship Commended student. Zaid has also been awarded the National Biology Teachers Association award for his research into racial disparities in bariatric surgery. As a student, Zaid was the president of the Shaker Model United Nations as well as a member of the Shaker FIRST Robotics Team and the Shaker Muslim Students’ Association. Outside of school, Zaid serves as a fireman at Verdoy Fire Department. He has also volunteered as a tutor at the Unity House, a homeless shelter in downtown Troy, as well as teaching Raspberry Pi and other STEM summer camps at Siena College. He regularly volunteers at the youth programs for AlArqam Center of Saratoga. In the fall, Zaid will be attending Union College through their Leadership in Medicine program, where he has been guaranteed entrance to Albany Medical College upon completion of his four years at Union, incumbent upon his GPA. In his free time Zaid enjoys traveling, soccer and kickboxing.

Gabriella Baratier, the daughter of Marianne Baratier, graduated from Guilderland High School as a 4.0 student and a member of the Class of 2021. She was the recipient of the Daryl Farley Scholarship and the SEFCU Smart Sense Scholarship, and she was inducted into the National Honor Society. During high school, Gabriella was involved in Key Club, Sources of Strength, the Guilderland Anti-Racism Committee, the Altamont Food Pantry, and the Altamont Reformed Church Youth Group. Gabriella was a captain on the Guilderland track and field team, and during her senior season she received the Coaches Award.
She is a member of the Class of 2025 at Union College in Schenectady, N.Y. At Union, she is a 4.0 student, a member of the Scholars Program, and a recipient of the Presidential Scholarship. She is majoring in history and double minoring in political science and English. She is employed as a tutor in the Union College Writing Center, and she is involved in the clubs Women’s Union, A More Equitable Union, and Pride Club. Gabriella is passionate about public history, Louisa May Alcott, and hiking.

Syvonne Forgette, the daughter of Efrat Forgette, graduated with an IB diploma from City of Buffalo – City Honors High School. She was the founder, president, and advisor of the Environmental Club; co-captain of varsity crew; and lead bassist in the orchestra. In the greater Buffalo community, Syvonne volunteered as a Buffalo Ski Center downhill race coach and as a bassist in the Buffalo Bluegrass Youth Ensemble. She received the Gold Star Award from the Girl Scouts of America. Syvonne was also an active teen in Jewish Buffalo. She was a presenter in the Student-to-Student Program, a graduate of the Buffalo Jewish Teen Leadership Fellowship, is a counselor at Camp Seneca Lake and has helped plan many teen initiative events. Syvonne was recently named a Community All Star Student by Buffalo Business First. Syonne will attend Tufts University in the fall to study biomedical engineering.

Madeline Harris, the daughter of Thomas Gaudet, was the valedictorian of her class at Oneida High School. During high school, she was president of the National Honor Society, Zonta Club, and Teens for a Better World Club. She was also a member of Student Council, Youth Court, Science Olympiad, and Environmental Club. During her senior year, Madeline was a student in the New Visions Allied Health Partnership, where she spent a majority of her mornings shadowing medical professionals at Oneida Health Hospital. Madeline was a member of the high school Chamber Choir and a player on the state-ranked Oneida Girls Varsity tennis team. She completed more than 60 hours of community service through efforts in the National Honor Society, Z-Club, and Oneida City Youth Court, including helping at various community events and mentoring a student at a local elementary school. She enjoys working as a waitress in Sylvan Beach and playing tennis with friends. Madeline plans to study biomedical engineering on a pre-medical track at Boston University in the fall. 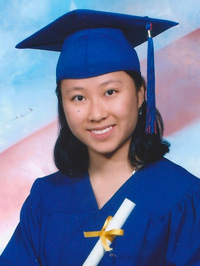 Gloria Lee, the daughter of Stella Lee, is an undergraduate at the University of Connecticut where she is majoring in actuarial science and minoring in computer science. She is currently a summer intern at New York Presbyterian Hospital in the Information Technology department. Gloria graduated from Stuyvesant High School in 2022. In high school, Gloria participated in ARISTA, Stuyvesant’s Honor Society, and was a senior editor for the Stuyvesant Writing Center. Gloria also volunteered at P.S./I.S 266 as an arts and crafts teacher for two years as well as at the Latimer Gardens Senior Center where she worked as a community outreach coordinator volunteer. Gloria previously worked as a teacher assistant for the Summer Rising program for the Coalition for Hispanic Family Services, where she gained teaching experience in helping non-native English speakers gain proficiency in writing and math. Gloria is well versed in Spanish and Chinese. Gloria has won the New York Scholarship for Academic Excellence, was a National Merit Scholarship Finalist, won an AP Scholar with Distinction award, and was a National Spanish Exam Gold Medalist. She was the founder and president of the Stuyvesant Papercrafts club for three consecutive years. In her free time, Gloria enjoys playing piano, which she has played for ten years, and swimming.

Christina Oberting, the daughter of John Oberting, will be entering her sophomore year of college at Colgate University this fall, where she is a neuroscience major on a pre-health track studying to become a neurology physician assistant after graduation. Throughout high school, she was involved in several organizations around the school and outside community, some of which include serving as the Vice President of the National Honor Society, a member of the varsity cheer team and ski club, working two waitress jobs at local establishments, volunteering at the Regional Food Bank and The Eddy Village Green, and serving as a peer tutor. During her first year at college, she has been involved in similar activities, including tutoring high school students at Hamilton Central School, running afterschool activities for elementary students with peers through the Hamilton Outdoor Group, and working with Colgate Hunger Outreach. This upcoming year she hopes to involve herself more in the school and local community, and will also be working as a community leader for the Office of Residential Life.

Ethan Schoenblum, the son of Paul Schoenblum, attended Bethlehem Central High School where he graduated on the honor roll and a member of both the Gladys E. Newell chapter of the National Honor Society and Spanish Honor Society. As vice president of the Masterminds Club and an active participant in many other clubs, sports, and student activities, Ethan connected with as many individuals as he could, as well as the community as a whole. He participated in the Bethlehem Youth Court, volunteered at the local Ronald McDonald House and soup kitchen, and worked as a teen aide for Jewish second graders at the Einhorn Center for Jewish Education. He also excelled in his studies, receiving the Harold Reissig Award for Mathematics and being commended in the National Merit Program. Ethan will be attending Binghamton University to study engineering and plans to work on a solution to a source of clean, sustainable energy. He enjoys weightlifting, playing the guitar and meeting new people.

Alexander Schwartz, the son of Andrew Schwartz, attended East Meadow High School where he was in the National Honor Society, Academy of Finance, Business Honor Society, Math Honor Society, Science Honor Society, Social Studies Honor Society, English Honor Society, Band/Marching Band, Battle of the Classes, Key Club, and Stem Club. He made Honor Roll every quarter of high school. Alex was on the cross-country team for three years, spring track team for three years, winter track for a year, and wrestling team for three years. He also played travel baseball for his first two years of high school and played flag football for all four years. Alex also worked as a baseball/softball umpire for all four years of high school and worked as a referee for SMAA Flag Football League. Alex has been in Cub Scouts and Boy Scouts since first grade. He is currently a Life Scout and is pursuing his Eagle Scout Rank. In 11th grade, during the start of COVID, he volunteered for 60+ hours in the ICU at Nassau University Medical Center. Also in 11th grade, Alex helped raise and train a future guide dog for the Guide Dog Foundation. For the fall semester, Alex will be attending Nassau Community College. In his free time, Alex enjoys going to the gym, wrestling, and hanging out with friends. He also enjoys watching baseball and football.

Lindsay Segal graduated from East Meadow High School in 2021 and currently attends Binghamton University. She is majoring in math and minoring in education/computer science. Lindsay was a member of winter and spring track throughout high school and competed at State Championships her junior year.  Lindsay was also a member of the National Honor Society, Math Honor Society, Science Honor Society and Social Studies Honor Society in high school. She has volunteered at Birthday Wishes of Long Island and the Bellmore-Merrick Community Cupboard. Lindsay also won an East Meadow Scholar Athlete Scholarship and the Long Island Teachers Benevolent Fund Len Motisi Scholarship. In her free time, Lindsay enjoys running, knitting, crocheting, traveling, and spending time with her friends, family, and twin sister.