/ Volume 40. No. 7 / PEF Organizing is on the ground every day supporting and advocating for you 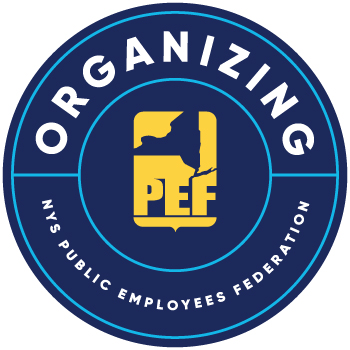 September 15, 2022 — Did you visit the PEF booth at the New York State Fair?  You weren’t alone.  More than 1,100 active members and retirees stopped by the booth from Aug. 24-Sept. 25 and signed about 5,000 petitions supporting the union’s Fund Our Future campaign.

The PEF Organizing Department was the driving force behind that booth and the constant advocacy on your behalf.

“Organizing is the backbone of the union,” said Organizing Director Dan Carpenter.  “It starts at the ground level.  We support local and statewide union initiatives, such as PEF’s Fund Our Future campaign, and we work closely with the Legislative Department and Communications Department on ways to inform our membership and gain outside support for our initiatives.”

The department’s staff of six comes from diverse backgrounds.

“We can be your voice,” she said of PEF.  “We can be your engine for advocacy.  Not everybody has the ability to easily express themselves, so we are that vehicle to help them put their needs into action and get results.”

Hitting the ground running, Pluvoise joined PEF’s statewide officers for a portion of their recent tour of PEF Regions across the state.  She emphasized the importance of the union being visible and in the trenches with members.

“We educate, empower and mobilize,” she said of the department.

Jessica Carpenter has been with PEF for nine years, five with organizing, and has traveled the state supporting member appreciation events and mobilization activities.

“Without organizing, the union has no strength,” said Carpenter, who coordinates Organizing’s efforts in PEF Regions 6-8.  Organizing keeps members informed, reaches out and discusses issues, and advocates for the membership. “Member appreciation events are really designed to thank the members, especially when the state doesn’t.”

Andrew Puleo made the move from PEF member to PEF staff to continue his advocacy on behalf of PEF members in Regions 1-5.

“I’ve been involved with PEF since the first week I was hired by New York State Department of Transportation in 1999,” he said.  “I also joined COPE (the Committee on Political Education, a union fundraising vehicle for federal lobbying efforts) my first week on the job and I was a member mobilizer within my first year as a PEF member.”

As an organizer with PEF, Puleo providers new member orientations; recruits leaders, such as Stewards, Executive Board representatives, and Committee members; and promotes and encourages members to participate in Regional Committees, such as Political Action, Women’s and Nursing.

“In the most basic sense, union organizing is an invitation to workers to be involved in their own lives,” Puleo said.  “Union organizers promote the reality that the collective voice of workers is a proven and effective way for workers to communicate their value and worth to employers.  Union membership lifts the quality of life for members and communities.”

Puleo encourages members to get involved by attending union meetings, joining a Division Committee, or running for an elected position.

After five years as a field representative for Region 12 on Long Island, Lisa Pinkard-Adams moved into an organizer role in Regions 10-12.  With her background in government, community organizing and social work, Pinkard-Adams said organizing is all about building relationships.

“I tell leaders my definition of organizing lies within those two words,” she said.  “It’s not all about numbers – it’s about people.  It can be anything from a one-on-one conversation to a multi-region electronic communication that reaches thousands at once.  We identify leaders, we engage, we educate, and we work to push the union forward.”

Pinkard-Adams said a lot of organizing work is done behind the scenes and requires collaboration between multiple PEF departments.

“The hard work takes place before an event ever happens and goes on after it’s over,” she said.  “We set up meetings, iron out logistics, and coordinate schedules.  Organizers are working with Field Services, Membership Benefits, Civil Service Research, elected leaders, the list goes on.”

At a recent Steward training, she realized a majority of the leaders in the room didn’t understand PEF’s organizational chart.

“I decided to develop a simple handout that offers leaders, old and new, information on PEF’s hierarchy,” she said.  “As organizers, we need to equip leaders so that they can equip the members.”

Retiring after 34 years as a registered nurse at SUNY Stony Brook, Nora Higgins recently joined the Organizing Department as the Nurse Coordinator.  She most recently served as Region 12 Coordinator for the past eight years, as well as a clinical professor of nursing, and Steward, for 22 years.  She

Higgins plans to travel to each PEF Region to meet with nurses and gain insight into their needs and issues they face.  “I hope my experiences, education, and strong motivation to get the right things done will prevail through my years of service,” she said.

Editor’s Note: This is the second in our continuing series “What Can PEF Do For You?” that will highlight the role PEF departments perform for the union membership.  You can read the first installment about PEF Health & Safety, here.