Delegates get tips for responding to Justice Center investigations, charges

/ Volume 40. No. 8 / Delegates get tips for responding to Justice Center investigations, charges

Many PEF members work at state agencies such as the Office for People with Developmental Disabilities that are subject to the watchdog efforts of the state Justice Center for People with Disabilities, and some members worry that they might be wrongly brought up on charges by the Justice Center in its efforts to protect individuals receiving services.

That’s why PEF repeated a workshop on “Justice Center Dos and Don’ts” for delegates to the union’s annual convention held last month in Niagara Falls.  The workshop also was offered at PEF’s 2021 convention.

The workshop gave an overview of the role of the Justice Center in investigating incidents, and charging and prosecuting employees who it believes have failed to follow the rules and procedures for providing proper care to the individuals in their charge.  Importantly, the workshop advised the delegates on how to respond to investigations, interviews, interrogations and formal charges.

When the Justice Center investigates an incident or report of abuse or neglect, it may take one or more of three tracks, they said – administrative, disciplinary or criminal.  And all three of these tracks can be involved at the same time.

Cases involving charges typically fall into one of three categories – 1. Serious (usually involving physical or sexual abuse) or 2. Slightly less serious (the individual was injured); or 3. Less serious (no one was seriously hurt).  If you are found guilty of a category 1 offense that information will likely remain on your record.  For a category 2 offense, it will usually be removed from your record after five years.  The records are kept on the Vulnerable Persons Central Registry.

Hannigan advised delegates that it is crucial to know your rights if you are caught up in a Justice Center investigation.  If you were involved in or a witness to an incident, you would havec been required to report it in writing.

As a mandated reporter, “Always document exactly what happened,” Keegan advised.  “What did you see?  What was said?  Who was there?”

If the Justice Center investigator asks to interview you, always ask, “Is it voluntary?”  If you are told it is voluntary, then decline to be interviewed.

“They won’t tell you if it is voluntary unless you ask them,” Keegan said. 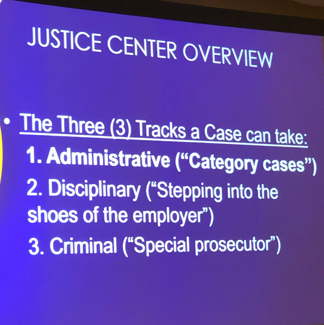 If the interview is compulsory, what you say cannot be used against you in a criminal prosecution, but it can support charges against you that threaten your job and your professional license or certification.

Generally, in such an interview, you should do more listening than talking, be as brief as possible, and be truthful.  If you do not know the answer to a question, just say, “I don’t know.”

The goal is always to get in and out of such an interview as quickly as possible, Hannigan said.  Remaining calm is important and do not bring documents to the interview unless you are ordered to do so.  Do not claim that you have not read the employee manual.  Save copies of any non-confidential work policies.

Only discuss the case with your union representative.  If you are charged you will have only 30 days to respond.

You can help avoid being charged in a situation by promptly reporting unsafe conditions to your supervisor in writing.  This includes things such as doors or lights that don’t operate properly, and damaged fixtures or furnishings.  It could become crucial evidence that you warned management of a hazard before someone was hurt.